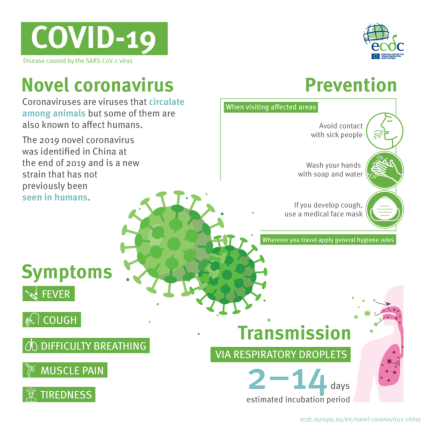 Cases in the U.S.

VACCINE UPDATE - " I have been hearing about heart problems in kids and young adults following the COVID vaccine.  Should I still get my child vaccinated?"  There have been higher-than-expected numbers of heart inflammation cases after vaccination with the mRNA COVID-19 vaccines, particularly among boys and young men ages 16 to 24.  The CDC still strongly recommends that all children 12 years and older be vaccinated, noting that benefits of vaccination greatly outweigh possible risks.

Cases tended to occur within several days after the second mRNA vaccine dose.  Those who developed myocarditis or pericarditis had mild cases and recovered completely after treatment.

If your child develops any of the following symptoms within a week of vaccination, seek medical care:

At least 470 children ages 0 to 17 years have died from COVID.  Many more have needed to be hospitalized, and long-term health effects even after mild infection in children are now being recognized.

The CDC continues to strongly recommend that all children ages 12 year and older get vaccinated — because the scientific data indicate that the benefits of vaccination continue to greatly outweigh the risks.

VACCINE UPDATE - WHAT IS THE DELTA VARIANT?  What to Know.  The highly transmissible COVID-19 delta variant, also known as B.1.617.2, was found in India in December 2020.  It’s now the dominant strain in India, the United Kingdom and now in the United States.  The delta variant poses a threat to countries where vaccines are scarce.  It has spread rapidly through India, where it was first discovered and where less than 13% of the population has received a shot.  The U.K. has vaccinated 58% of its population, but the variant accounts for more infections than all other virus strains.

The delta variant accounts for 40% of new U.S. cases according to Dr. William Lee, vice president of Science at Helix.  The gamma variant, identified in Brazil, accounts for 15% of new cases.  Helix researchers have noted occasional cases of an "offspring" variant of the delta virus or delta-plus, but aren't seeing evidence these are driving the growth of delta around the country.   The alpha variant is down to 20%.

Researchers are unsure why the delta variant is so much more transmissible than others.  They assume changes in the variant’s protein may make it easier to enter human cells.  An earlier study suggests a mutation in the delta variant may help it blend better, after it attaches, with human cells making it able to infect more of cells and overpower the immune system.

The Delta variant affects younger people more often.  In the United Kingdom, studies show children and adults under 50 were 2.5 times more likely to become infected.  Studies suggest symptoms appear to be more severe and sufferers have almost double the risk of hospitalization than those affected by the alpha variant.

Top symptoms reported on the app include:

A cough is becoming less common and loss of smell is no longer listed in the top 10 common symptoms.  Researchers are concerned people may mistake symptoms for a bad cold and avoid quarantine, helping the variant spread.

Vaccinated people safe from delta variant and other COVID-19 mutations.  Pfizer, Moderna, and the Johnson & Johnson vaccines are thought to be effective against the highly transmissible delta variant, meaning another major wave of infections and hospitalizations is unlikely.

“If you're vaccinated, you are safe from the variants that are circulating here in the United States,” said Rochelle Walensky, director of the Centers for Disease Control and Prevention.

In the U.S., more than half of the population over 12 years old has been fully vaccinated and roughly 67% of adults have received at least one dose.  Of seniors, prioritized due to their increased vulnerability to severe illness, 78% have received both doses of the Pfizer or Moderna vaccines or the one dose Johnson & Johnson vaccine.  Deaths due to COVID-19 have also fallen to their lowest averages since March 2020, with about 272 fatalities reported over the past seven days, according to tracking.

The Pfizer-BioNTech vaccine has proven 88% effective against the delta variant compared with 93% effectiveness against the alpha variant, but just a single dose of the two-shot vaccine will leave the person more susceptible to the mutated strain at only 33% effective.  The second dose in the two-shot regimen bumps that efficacy rate to 88%.

Moderna’s two-shot vaccine also decreases the risk of getting seriously ill due to the variant.  Researchers used blood samples from eight trial participants who received second vaccine doses and found they produced antibodies against several variants.  The company’s findings have yet to be peer-reviewed, but CEO Stéphane Bancel called them “encouraging.”

Two doses of the AstraZeneca vaccine are 92% successful in stopping hospitalization due to the delta variant.  And no deaths have been reported among those vaccinated.

Infectious disease experts are currently weighing the need for a booster with either Pfizer or Moderna shots for people who got the J&J vaccine.  The virus will continue to shape-shift and become more virulent, but that does not mean the U.S. will endure another devastating wave of hospitalizations and deaths due to the disease.  We still see substantial hospitalization rates and substantial death rates, even though they're not as bad as when the virus first showed up.

Delta variant gains ground in U.S., men do worse with COVID-19.  Men appear more likely than women to experience severe outcomes from COVID-19 regardless if they have underlying health conditions.  Researchers in New York City tracked 5,000 patients of both sexes diagnosed in early 2020 and found that men were sicker when first diagnosed, had a higher need for intensive care treatment and higher rates of death than women.  This was true even though men on average were younger and less likely to have risk factors such as obesity and high blood pressure, previously linked with poor COVID-19 outcomes than women.

Moderna vaccine antibodies neutralize variants in lab study.  Researchers found the vaccine had produced antibodies capable of neutralizing all variants, including versions of the beta variant, identified in South Africa and three lineages of variants first identified in India, including the kappa and delta variants.

Earlier in June, researchers reported in the journal Nature that the mRNA vaccine from Pfizer and BioNTech elicited antibodies that could neutralize all tested variants, including Delta, although at reduced strength. (https://bit.ly/35ZlmWO; htps://reut.rs/3qBPa54 https://reut.rs/3qBPa54)

Open https://tmsnrt.rs/3c7R3Bl in an external browser for a Reuters graphic on vaccines in development.

India Signals Alarm About New ‘Delta Plus’ Variant.  Public health officials in India are sounding the alarm on another coronavirus variant, which they are calling “Delta Plus.”  The Delta Plus variant is more transmissible, better able to attack lung cells and less responsive to antibodies.  The delta plus variant, a mutation of the Delta strain has also been detected in the U.S., U.K., China, Japan, Poland, Portugal, Russia, and Switzerland.

Public Health England also said another variant, Lambda, was designated a “variant under investigation” was first identified in Peru, has spread to 26 countries.  The six cases identified in the U.K. have been linked to overseas travel, according to the report.

Dr. Fauci, the U.S. top infectious-disease expert, warns that the Delta highly infectious coronavirus variant could become the dominant strain in the U.S. if people don't get fully vaccinated.

"We cannot let that happen in the United States," Dr. Fauci said.

The Delta variant caused record-breaking infection numbers in India, where it was first identified. A surge in coronavirus infections brought India's health system near collapse.

The Biden administration is trying to give more than 75% of the U.S. population at least one dose of a COVID-19 vaccine by July 4 to stop another surge in infections.  More than 51% of Americans have had at least one dose, and more than 42% are fully vaccinated, according to the Centers for Disease Control and Prevention.

How to Protect Yourself?  Getting vaccinated is your best bet!

Phone orders are encouraged. Large orders prior to 10:30 am

Deliveries not available during covid restrictions.

Stop in to check out all the items currently discounted for your personal resolutions.

Get Social with Us